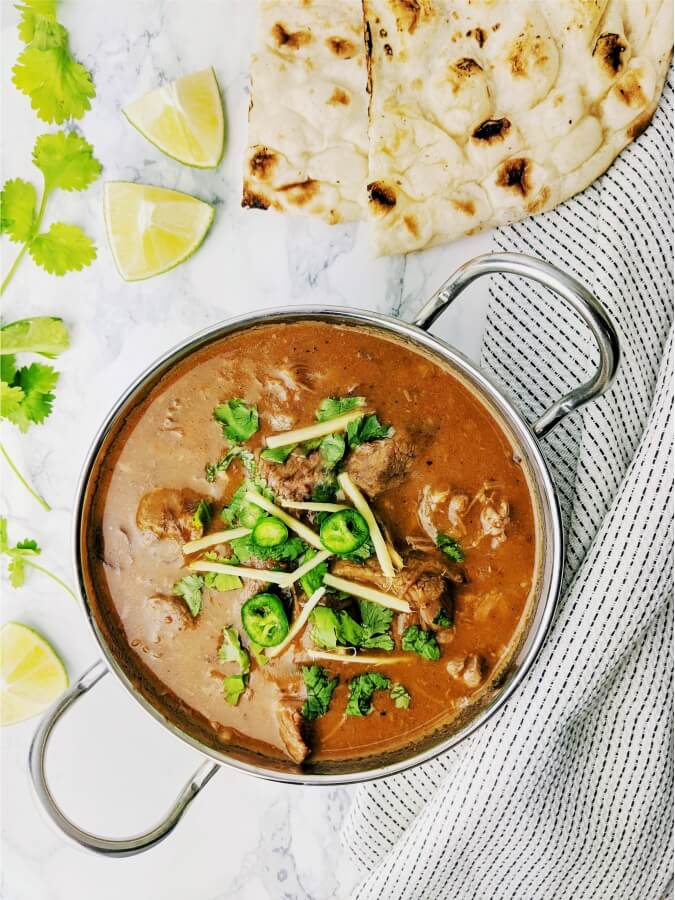 Nihari is made by slowly cooking the meat for hours. Nihari Recipe can be made with any kind of meat such as chicken, lamb, mutton, or goat meat, however, the most desirable meat for nihari is shank meat of beef along with bone marrow.

The word ‘Nihari‘ is taken from the Arabic word ‘Nihar’ which means early morning. As the name shows, it was prepared for Nawabs and Mughals as their early morning breakfast and their morning prayers.

Original Nihari was cooked overnight on slow flames to get the real flavor of beef shanks.

Although Nihari was initially made for early morning breakfast, people eat it for lunch and dinner also as per their choice. 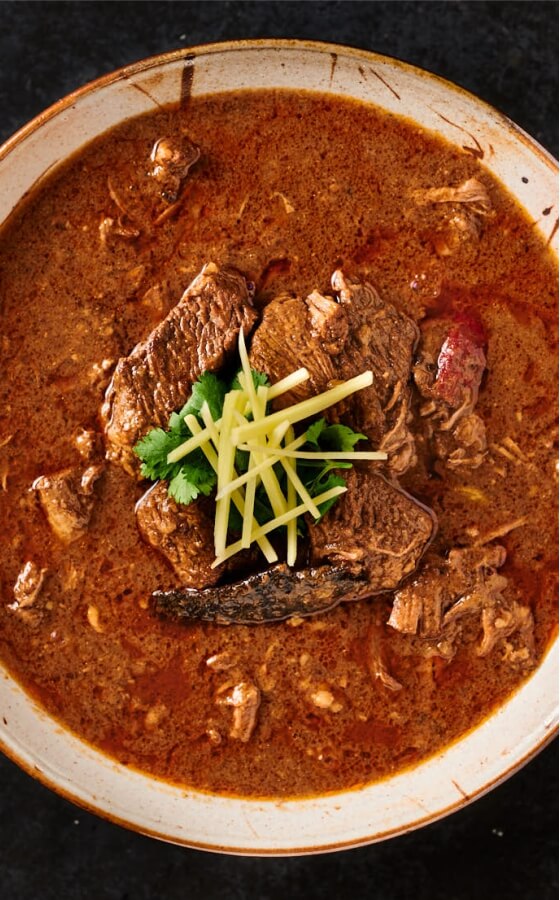 People cook nihari on a slow flame overnight with stock, garlic, and other spices such as cardamom, salt, cumin, cloves, and whole spices. When the meat is tender, people add tarka to it.

Tarka is made with oil, salt, pepper, ginger, red pepper, and turmeric powder. Nihari is garnished with ginger slices and green chilies with lemon wedges.

This dish is mostly served with naan, Khamiri roti, or tandoori roti.

Nihari was invented during the reign of the Mughals in Old Delhi. After morning prayers, they ate it and slept until the afternoon.

Due to its power-boosting properties, it was a famous breakfast.

Many people from Delhi moved to Karachi after Pakistan gained independence.

There were some people who opened restaurants offering nihari thereafter they introduced this dish there. Thereafter, it became widely known throughout Pakistan, India, and Bangladesh.

To extract the true flavor and texture of Nihari, shank meat or bone marrow was originally used.

However, people also make nihari in different ways. Here are some famous types of nihari made by people.

Beef nihari is the most famous type of Nihari in Pakistan. It is a wonderful addition to any breakfast, lunch, or dinner table. Shank meat is preferably used to make this dish with other spices.

Among people, mutton nihari is also really popular and loved. It takes about four hours to prepare and makes a wonderful festive dish.

It is not very common but it is delicious to satisfy your cravings for nihari. Chicken nihari isn’t required in time and you can make it easier when you don’t have much time.

Magha is a Persian word that means ‘brain’. It is a Pakistani version of nihari where the beef stew is made with fried maghaz and spices. The maghaz has to be boiled before adding to the stew. 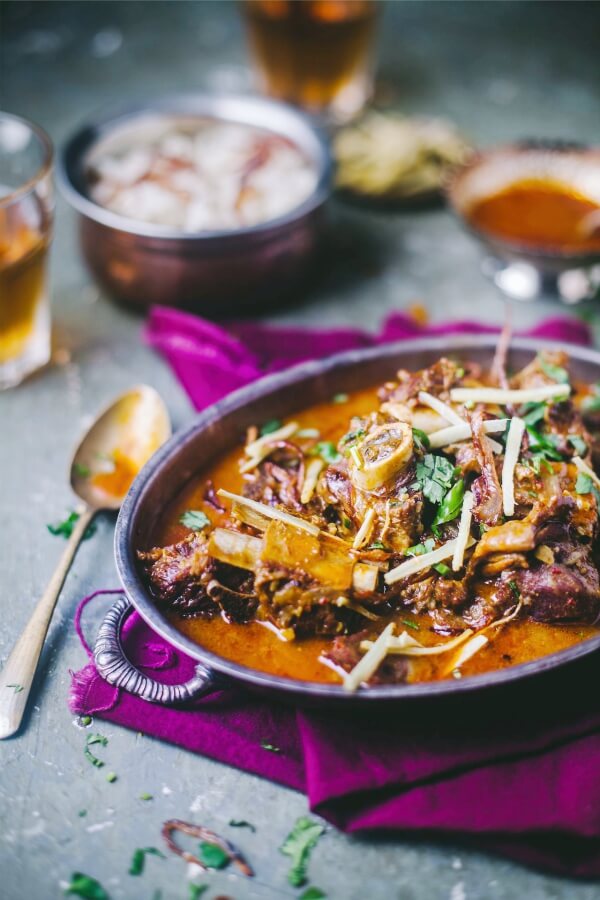 What to serve with Nihari?

As the name shows, you can prepare a perfect breakfast table for your loved ones by adding different dishes along with nihari. Here are some ideas for dishes you can add to your menu.

How to cook Nihari with no mistakes?

Making nihari is not a simple process. It needs complete attention and details to follow. Here are some tips to make delicious nihari

Q: What cut of meat is nihari?

A: Nihari is originally made of beef shank and bone marrow. It is made for long hours or preferably overnight to get its real flavor.

Q: What is nalli nihari?

A: Nalli nihari is made with beef shanks and bone marrow. Bone marrow and bones are the main ingredients for providing a delicious flavor of nihari.

Q: Is nihari and paya the same dish?

A: Nihari is made with meat while paya’s are made of beef or lamb feet. Some people combine beef paya and beef meat to make a dish called paya nihari or bong paye.

Q: What meat is a shank?

A: Shank is the portion of meat around the tibia ‘the leg bone beneath the shoulder and knee’. Mutton or lamb shanks are mostly braised whole.

Q: Can we use any meat for nihari?

A: Though beef shanks are usually used for nihari, you can use any meat for nihari including mutton, beef, chicken, or lamb.

Q: How to make nihari thick?

A: Roasted flour is mixed in water to make a thin paste and then added to the stew to make nihari thick.

Some of the best tips for eating healthy include:

The method of the nihari recipe in recent times is almost the same. It was made with thicker pieces of meat as it has to be cooked for long hours on slow flames.

MORE RECIPES:   Jalebi Recipe | How to make Jalebi at Home

Shank or shin meat is always preferred for nihari because it is soft and breaks off the bone in a steamy, juicy bite.

Mutton and chicken nihari are also made recently, however, beef nihari is mostly liked and made in Pakistan and India.

Nihari is not like traditional gravy as it is thicker and more flavourful. 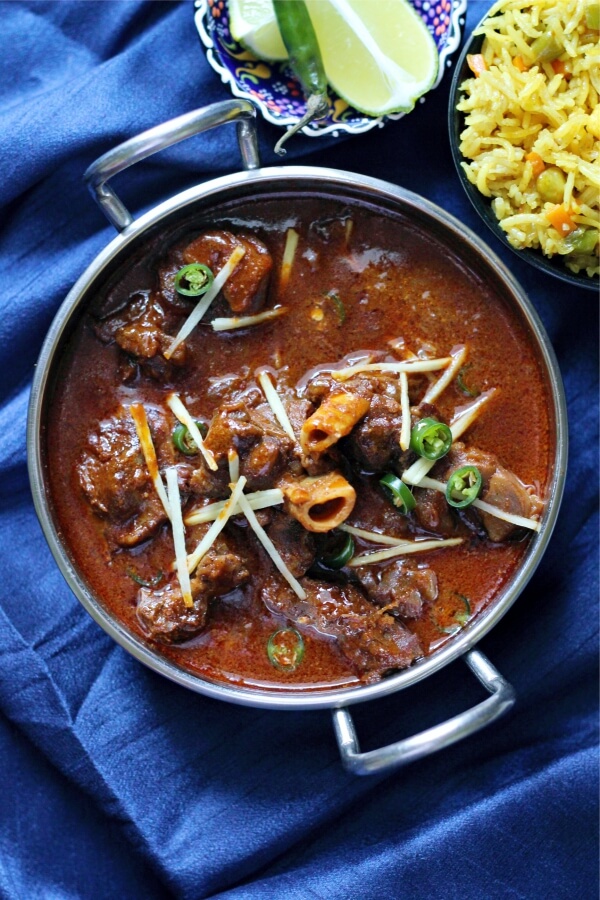 It is because the shanks are cooked with bone marrow throughout the night. Nihari is made in large pots that are sealed with dough to be cooked in steam on low flame.

A good nihari is made when it is made with proper knowledge of spices and other ingredients. If the nihari is not cooked thoroughly, it will lose its real flavor and texture.

Your delicious nihari is ready. Serve it with naan, tandoori roti or sheermal. Try this nihari recipe at home and inspire everyone with your cooking skills. 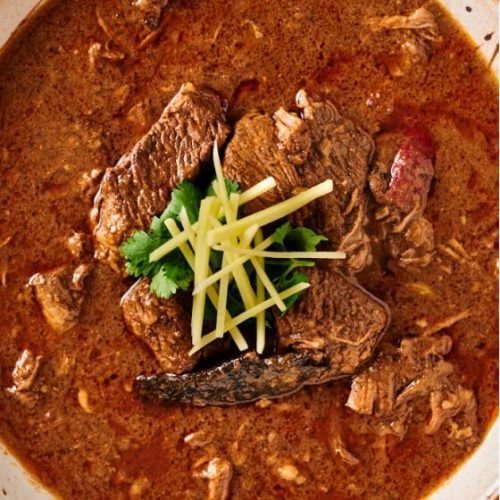 Nihari is not like traditional gravy as it is thicker and more flavourful. It is because the shanks are cooked with the bone marrow throughout the night. Nihari is made in large pots that are sealed with dough to be cooked in steam on low flame. A good nihari is made when it is made with proper knowledge of spices and other ingredients. If the nihari is not cooked thoroughly, it will lose its real flavor and texture.
Print Recipe Pin Recipe
Prep Time 40 mins
Cook Time 2 hrs
Total Time 2 hrs 40 mins
Course Main Course
Cuisine Indian, Pakistani
Servings 4 Persons
Calories 550 kcal

This website uses cookies to improve your experience while you navigate through the website. Out of these, the cookies that are categorized as necessary are stored on your browser as they are essential for the working of basic functionalities of the website. We also use third-party cookies that help us analyze and understand how you use this website. These cookies will be stored in your browser only with your consent. You also have the option to opt-out of these cookies. But opting out of some of these cookies may affect your browsing experience.
Necessary Always Enabled
Necessary cookies are absolutely essential for the website to function properly. These cookies ensure basic functionalities and security features of the website, anonymously.
Functional
Functional cookies help to perform certain functionalities like sharing the content of the website on social media platforms, collect feedbacks, and other third-party features.
Performance
Performance cookies are used to understand and analyze the key performance indexes of the website which helps in delivering a better user experience for the visitors.
Analytics
Analytical cookies are used to understand how visitors interact with the website. These cookies help provide information on metrics the number of visitors, bounce rate, traffic source, etc.
Advertisement
Advertisement cookies are used to provide visitors with relevant ads and marketing campaigns. These cookies track visitors across websites and collect information to provide customized ads.
Others
Other uncategorized cookies are those that are being analyzed and have not been classified into a category as yet.
SAVE & ACCEPT
Shares